Excuse me, the Internets have an announcement to make: 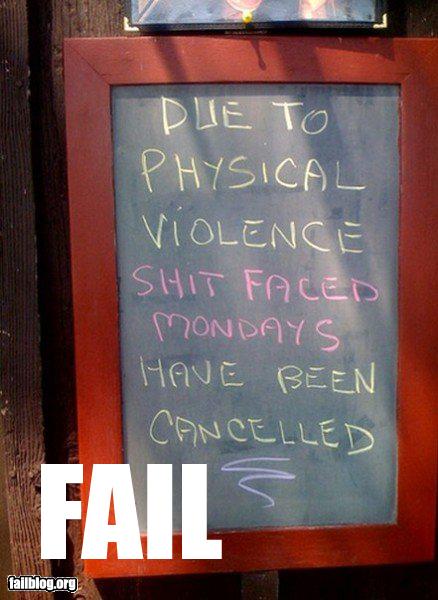 Damn. I never even knew there WAS such a thing, and now it’s been cancelled on me! I think I need a drink.Oh, and speaking of “need a drink”, read this and weep in thy beer, O my friend and neighbor to the south of us:

Here are a few truths: First, we’ve been living in a one-dollar, one-vote corporatized democracy for a long time. If this is news to you, then you’re probably also shocked to learn that the U.S. Constitution, by awarding two senators to each of what H.L. Mencken called “the cow states” — no insult to the cows in my own barn — was deliberately crafted to make fundamental change difficult. Who made “moderates” like Blanche Lincoln of Arkansas, Ben Nelson of Nebraska and Joe Lieberman of Aetna mini-presidents? Alas, the founding fathers did.

Living in such a polity, anybody who thought entrenched interests like the insurance, pharmaceutical and hospital industries weren’t going to find ways to make money off healthcare reform probably wasn’t paying attention back at the beginning, when Obama said that despite the abstract appeal of a Canadian-style single-payer system, it was a political non-starter.

Really, Gene? Really, Barack? Our single-payer system up here, which is popular with nine out of ten of us, and which could bring down even a majority Conservative government if it ever foolishly tried to gut it, is just an “abstract” one? You “free”, “independent” Yanks are that powerless against the corporations down there? Or are you just that cowardly? What do you have a government for, if not to put a leash on those snarling, dog-eating dogs, and muzzle them?Oh, I get it. The dogs are the ones holding the leash in the United States of Amnesia, and with a wad of Benjamins, they muzzle YOU. Spare us the old Soviet Union jokes, we’ve heard them all before.Good thing Tommy Douglas is a-moldering in his grave, or he’d chew your asses up so badly, you’d never sit down again. He faced as much pressure from the forces of “free market medicine” as any US president ever could, but he didn’t back down. Even when doctors went on strike in Saskatchewan, he just brought in doctors from elsewhere who were willing to take up the slack until those misguided MDs realized their mistake and came into the fold. In Venezuela, it was so bad that Chavecito brought in Cuban doctors, as did Evo in Bolivia. Both of them had the gonads to go up against the oligarchs of their respective countries and do it, just as Tommy Douglas had the gonads to do here. So, Barack, where are YOUR ‘nads at?And sorry, Gene, but imperfection is NOT a start…except to an even bigger débâcle down the road. Forcing fellow-citizens to buy insurance they couldn’t afford in the first place is not going to provide them with the care they need. It will, however, help ensure that they can’t afford a house, or a car, or maybe even food and clothing. All of which they’re gonna need before they need a doctor or a hospital.No, this gradualist approach is NOT going to lead to gradual improvements. It’s going to lead to people avoiding care for as long as they can, until an emergency drives them to it. And you can never underestimate the stupid stubbornness, or the stubborn stupidity, of a conservative, either. They WILL hold out until an emergency, or death, whichever comes first. They will spend the duration of their nasty, brutish and short lives muttering under their breath about how hard they work for their money, and about the dangers of relying on Big Government. And for once they may be right, although not the way in which they think they are. In the US, government is beholden to Big Money. All US governments, Democratic or Republican, are conservative that way. Even FDR didn’t make good on his early impulse to de-fang Wall Street! And a government beholden to moneyed interests is a government doomed to the distrust of its own citizens no matter their political affiliations. That distrust, of course, is richly deserved, because the citizens are the ones who will be left out in the cold. Unless, mirabile dictu, the government grows a spine and tells Big Money to go screw. And understands that it will have to fight–REALLY fight–for what’s right.Tommy Douglas saw that coming when he took the plunge in Saskatchewan, and did what the progressives of that province elected him to do. No gradualism for him; he knew what was right. He didn’t go halfsies, and neither should anyone else whose intention it is to provide universal healthcare.Now, I REALLY need a drink.

This entry was posted in All About Evo, Canadian Counterpunch, Huguito Chavecito, If You REALLY Care, Isn't It Ironic?, Obamarama!, Socialism is Good for Capitalism!, The WTF? Files. Bookmark the permalink.