Wankers of the Week: No rest for the wanked

Hooboy! Summer came three weeks early this year, meaning I’ve been caught scrambling. I got my garden dug, tilled and planted in record time; the wild asparagus is growing so fast that I could be bending over a patch, peering for any shoots still tender enough to pick, and that one rogue spear that was below ground when I started peering would suddenly jump up and jab me in the ass. Yes, it’s THAT kind of weather out. Hot, sticky, unforgiving, no rain in the immediate forecast, so no end of the water hose in sight. No rest for the wicked…and no rest for these people who can’t get into the garden for playing with themselves, either:1. Jeff Fucking Owens. Killing fags with a scattergun is okay. So is allowing your own fucking SON to sexually assault kids, as long as the kids are of the other sex. Nice pro-life family values you got there, preacher-man.2. John Fucking Stossel. He wants the Civil Rights Act of 1964 repealed? I think his job should be repealed instead. Clearly the most useless piece of shit on the tube, after Glenn Fucking Beck and Bill O’Fucking Reilly. If he thinks private businesses should have the right to discriminate, then we as private citizens watching the PUBLIC airwaves should have the right to discriminate, too…against fucking wingnuts like HIM.3. Rand Fucking Paul. Another wingnut who I hope will face MASSIVE discrimination, this one at the polls…discrimination against racism and stupidity. Canada and Mexico are watching you, Rand…Boogaboogabooga!!!

4. Fucking Harpo. Ignoring your own minister’s advice on funding for maternal-health initiatives in the Third World? That’s got to represent some whole, new, as yet unplumbed depth of dumbth. Especially since your anti-choice “base” is a vocal, but stagnant minority, and bound to remain so. Way to shoot your own foot off, Stevie Peevie.5. Robert Fucking Rodriguez. Using Facebook to slander Iraqi kids (who, fortunately, know no English) with homophobic slurs? Asshole, there’s a Facebook group you may want to look at. 6. And speaking of homophobia and militarism, how about that lovely and talented (and deeply closeted) Bryan Fucking Fischer? Nice sophistry there, dude. But in fact, Hitler didn’t USE gay soldiers, he PURGED them. Starting with one very high-ranking one who looked likely to challenge his leadership early on. And he did it with the brutality of a straight man. Look up Ernst Röhm if you don’t believe me.

7. Sarah Fucking Palin. A trainwreck with lipstick, that’s the Paliness. Accusing Obama of “opium addiction” has got to be a whole new brand of stupid. As has this. If I’m reading it correctly, she’s claiming she held Exxon accountable for the Valdez spill. Um, what? This is the “Drill Baby Drill” quitbull we’re talking about here. And that spill was before her time even as mayor of fucking Wasilla! She can’t even hold herself accountable, much less a big oil company with bottomless pockets.8. Marc Fucking Ouellet. Yes, he’s made the list again, this time on the basis of sheer irony. Not a word to say about REAL moral crimes like pedophilia, but he wants a debate on the nonexistent “moral crime” of abortion. Prepare to lose, Cardinal Ouellet…your side has been on the losing end of history for decades, if not centuries, already. Shit, what’s one more defeat? 9. Jim Fucking Prentice. Good God, man, have you learned NOTHING from the BP catastrophe? Nothing at ALL? There should be NO drilling for oil in the Arctic, or any other offshore location, from now on! And no, we don’t think your say-so is enough to convince us that there won’t be another Deepwater Horizon. 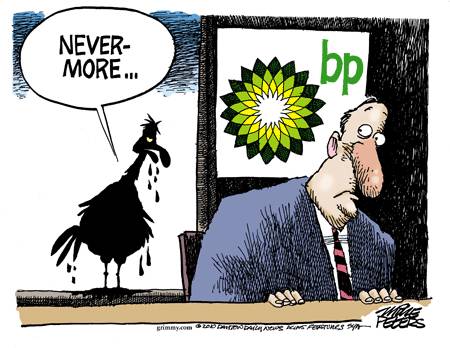 10. Tony Fucking Clement. How embarrassing is it when you advocate for RIAA-nasty copyright laws here in Canada, only to break them yourself? And how stupid is it to do BOTH? Not only the law is an ass, but he who shills for it (and other things) also is. And then there’s the matter of science and sexism, and Tony once more playing dumb. Why is this man sitting in Ottawa, and not selling used cars in the boondocks? It’s not as if we don’t have enough national embarrassments already.11. Andrew Fucking Irvine. No, it’s not enough that men virtually own and rule the entire planet; whenever someone insists on opening a tiny little door for a female or two, they have to cry oppression, too. Oh, why don’t those meddling women go back to their kitchens and just admit that they will never be as good as the men, and that stay-home motherhood is ever so much more satisfying, nay, the only true liberty? That way, at least this inane yelping about “reverse discrimination” will finally stop…yeah, in a pig’s ass it will.12. John Fucking McTernan. Yeah, blowing sugar up Israel’s ass for Jeebus is the perfect way to prevent deep-sea oil wells from blowing out. Silly me for not having seen it sooner! Holy Christ, talk about the depth of the dumbth…13. Glenn Fucking Beck. Children of political figures are off limits, unless the figures in question have a D after their names. In which case, they’re fair game. (And no, I do not believe his apology was sincere. Nothing he says is, unless by sincere you mean bat-shit crazy.)14. Fucking Dubya. Yeah, no shit, his wankage just never stops wanking. What he said to Néstor Kirchner, back when the latter and not his wife was president of Argentina, is enough to make any sane person’s hair turn white. Then crumble. And fall out.15. Bruce Fucking Walker. Yes, I was tempted to spell that name with an N where the L currently sits. You would too, if you had to sit through this much silly antifeminist-rightard drivel. Someone please inform him that his beloved harpies, the Paliness and the Coultergeist, are not going to have sex with him–the one because she’s married, the other because she’s undead, and both because he’s not in any position to advance their earnings. And also, that their success owes directly to feminism…because if men like Bruce had their way, these sad excuses for “successful” women would have never learned to read or write, much less get to vote and be seen flashing their gams in public. In fact, stupid phrases like “crutch of nebulous patriarchy” and “the left is, at essence, simply vile” make me almost sorry to be literate myself. Whaddya bet his two asinine books are vanity-published? 16. Thomas Fucking Friedman. While we’re on the subject of dreck-writers with asinine phraseology and books no thinking person actually reads, how about this one? Not content to slam Chavecito gratuitously (and groundlessly), now he’s moved on to Lula–for daring to be nice to the president of Iran. AND he’s claiming that Colombia–land of the “false positive”, where the president’s own brother is a paramilitary narcoterrorist (along with their cousin)–is a model democracy! No wonder Matt Taibbi’s always pantsing him. I just wish Matt would give him a swirlie for not only writing poorly, but for being such a nasty shit behind all the pseudo-clever polemical putzery.

17., 18., 19, and 20. and 21. Craig Fucking Smith, Fucking “Dodo” (hey, she picked that name for herself!), Jojo Fucking Blue, and Fucking “Rightchik” (Christ, learn to spell, bitch!) and Sandy Fucking Crux. Go, I command you, and read what my soul-sister CK has dug up on that circle jerk that is the Blogging SupposiTories. You will laugh, you will cry, you will have enough time left over to make perfect panini. She reads and satirizes their drivel so the rest of us don’t have to, and for that, I am eternally indebted.And finally, to “kevin”, who is so pea-brained that he doesn’t know how to capitalize his own name, nor how to distinguish between an economist and the world’s foremost linguist, much less engage in a reasoned debate on propaganda. Well, surprise–that’s because he knows he’d lose. No wonder, then, that he defecated here when my Noam Chomsky quotation had rolled off the front page. “kevin”, like all lowercase idiots, is too cowardly to be seen in the full light of day. But don’t worry, Kevin, I fixed that for you. And your shift key, too.Good night, and give it a fucking rest, wouldja?

5 Responses to Wankers of the Week: No rest for the wanked