Reichsbürger: Germany’s “sovereign citizens” have blood on their hands 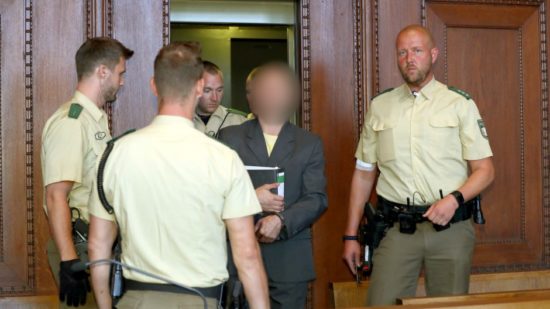 A man known only as Wolfgang P. makes his first court appearance. His face is blurred out in accordance with German privacy law. But what he is accused of sounds very un-German. In fact, it sounds like he’s been taking notes from a certain uncouth band of Yanks:

“I am the free man Wolfgang.”

The accused, Wolfgang P., wouldn’t say more than that during the preliminary hearing before his murder trial in the Nürnberg state court. He was present, and everyone knew who he was. And in fact, the 49-year-old has been well known since October 19, 2016 — as a so-called “Reichsbürger” who shot a police officer during a routine call in Georgensgmünd. During the same deployment, two other officers of the special commando unit were injured, one of them shot through the underarm, another with a splinter to the face. The charges are murder, three times attempted murder, as well as grievous bodily harm.

The officers were there to confiscate the sport-hunter’s guns, since authorities no longer regarded him as reliable. The previous spring, the local prosecutor’s office had become aware of Wolfgang P. after a tax-enforcement effort failed. That summer, the owner of some 30 guns repeatedly refused police and weapons controllers access to his property. Then came the so-called routine call.

Psychiatric expert Michael Wörthmüller reveals how P. experienced this event. Shortly after the incident, he talked with P. about it. At about 6 o’clock in the morning, the officers managed to enter the property. P. said he heard a noise “like grenades” and the loud screams of a woman in the house — it was “like a hell-spectacle from the war”. The 49-year-old was awakened in his home on the first floor, and asked himself if World War III had broken out. “It was just seconds between asshole and hero,” Wörthmüller quotes the accused as saying. What does that mean, a female judge wants to know. Exactly what, even the psychiatrist can’t say, but only this much: In hindsight, P. realized that he had made the wrong decision.

Wörthmüller, who runs the Clinic for Forensic Psychiatry in Erlangen, testified over P.’s “not uncomplicated life story” and repeats what P. told him. The accused had nothing against the police, since they were concerned with the upholding of public order after all. He never wanted to harm any police officer. He owned all his weapons only for self-defence. Above all, the attacks in Ansbach and Würzburg last year had made him insecure and he was afraid of attacks via institutions. However, P. does not see himself as a “Reichsbürger”, as his defence attorney, Susanne Koller, emphasized during the trial.

Since the Georgensgmünd incident, the so-called Reichsbürger have been in the authorities’ spotlight. Authorities estimate that there are roughly 12,600 of them throughout Germany; several hundred are right-wing extremists. In Bavaria, there are at least 3,000 so-called Reichsbürger. These individuals do not recognize the present-day republic as their state. Instead, they claim that the German Reich still stands. They consider the constitution, authorities and courts illegitimate, and accept no official notices.

In the conduct of Wolfgang P., there are parallels that match this description. Along with the 30 weapons, the accused also had about 1,000 litres of diesel fuel stored in his home, in order to be prepared for emergencies. A bailiff coming to collect back taxes was rudely rebuffed. But P. considers himself to be a peaceful man. Until October 19, 2016. As he saw the beams of flashlights through the milky glass of his door, he flew into a panic, grabbed his gun, and fired.

The state prosecutor’s office sees the matter quite differently. At least two months beforehand, Wolfgang P. had already planned to kill or injure as many police officers as possible in the line of duty. For that reason he barricaded himself in his home behind a corner of the wall, with a line of sight on the door. He was wearing a bulletproof vest, with a loaded firearm at the ready. He waited until he could hit numerous officers — and then fired through the half-glass door eleven times.

As the prosecutor is describing this version of the story, a woman sitting in the courtroom cries. She is the mother of the 32-year-old slain officer. The family’s world fell apart that day, says the survivors’ lawyer, Monika Goller. It is “hard to bear” how the accused, who refers to himself only in the third person as “Wolfgang”, comports himself in court.

As the case goes to court, it could get very interesting. The question is whether the court will go with the prosecution and find P. guilty of murder, or with the defence, which characterizes the shots at the special commando unit as self-defence in an emergency. Twelve days have been set aside for the trial in mid-October. Wolfgang P’s defence team already doubt whether they will be enough.

Other similarities: Gun hoarding, which is a much more serious criminal matter in Germany than it is in the US of Amnesia. In the US, it seems no one cares how many guns you own or whether you got them legally, or why you have them. In Germany, it’s quite a different story; guns are more strictly controlled, and the authorities keep tabs on who buys what and why. Since when does a mere sport-hunter need 30 or more? That’s considered a small arsenal.

And when you combine that with the tax-avoidance pattern, red flags go up. Hence the deployment of a police commando unit, rather than a polite knock on the door and a mild-mannered conversation. That conversation had already been attempted, and “rudely rebuffed”. There was no reason to assume Wolfgang P. would in fact be the peaceful man he claimed to be, and his conduct on the morning of the shooting lays that claim definitively to rest.

Whether Wolfgang P. is a Reichsbürger — a term loaded with Hitlerian allusions — or not, he is definitely parallel to the “sovereign citizens” of the US, who recognize no duly constituted authorities as lawful, and who have committed all manner of assaults in so-called “self-defence”. Up to and including murder.

This entry was posted in Confessions of a Bad German, Fascism Without Swastikas, Guns, Guns, Guns, Isn't It Ironic?, Isn't That Illegal?, Isn't That Terrorism?, Law-Law Land, Men Who Just Don't Get It, The United States of Amnesia. Bookmark the permalink.