“But why don’t moderate Muslims speak out against terrorists?” 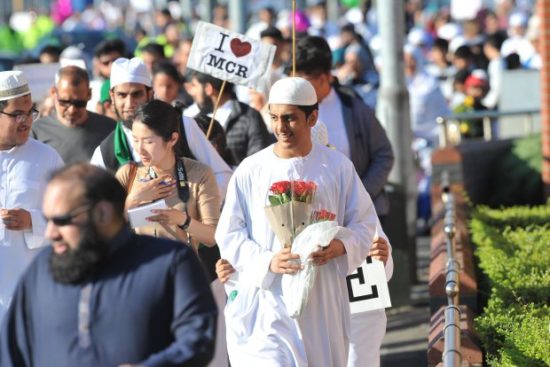 If there’s any question from the right I’m thoroughly sick of hearing (although all of their questions are eye-glazingly dumb and inane), it’s the ones about the Muslims: Where are all the moderates who oppose terror? Why don’t they say anything? Doesn’t that mean they’re all secretly complicit? And so on.

Mostly, I put it down to projection. I mean, why don’t right-wingers speak out against fascists and murderous gun nuts? Where are THEIR moderates, and why don’t THEY oppose home-grown neo-Nazi terrorism? Why don’t they even take it seriously? Why do they refuse to speak out against their asshole co-religionists who shoot up women’s clinics? Et cetera. I mean, that’s the biggest terror threat all over western civilization right now.

But for those who sincerely do wonder where the moderate Muslims speaking out against terror are, now you know: They’re everywhere. And in London, as in Manchester, they are speaking out in their own way…by refusing to speak in a certain highly significant way:

More than 130 imams and Muslim religious leaders have said they will refuse to say funeral prayers for the perpetrators of Saturday’s attack in London.

In a highly unusual move, Muslim religious figures from across the country and from different schools of Islam said their pain at the suffering of the victims and their families led them to refuse to perform the traditional Islamic prayer – a ritual normally performed for every Muslim regardless of their actions. They called on others to do the same.

They expressed “shock and utter disgust at these cold-blooded murders”, adding: “We will not perform the traditional Islamic funeral prayer over the perpetrators and we also urge fellow imams and religious authorities to withdraw such a privilege. This is because such indefensible actions are completely at odds with the lofty teachings of Islam.”

“Completely at odds with the teachings of Islam.” This is true. The Qur’an itself (Surah 5, Verse 32) states that whoever saves a life is regarded as having saved all of humanity. What do you suppose is the converse of that?

“We also urge fellow imams and religious authorities to withdraw such a privilege.” If that’s not speaking out, I don’t know what is.

Oh, and get this:

The Metropolitan police commander for engagement, Mak Chishty, the highest-ranking officer of Muslim faith, called for “a step-change – a different direction and a different movement to counter the scourge of terrorism, extremism and hatred that we have in our communities at present”.

In a statement he read out on behalf of Muslim communities, Chishty said: “It is the Islamic duty of every Muslim to be loyal to the country in which they live. We are now asking questions to understand how extremism and hatred has taken hold within some elements of our own communities.”

Harun Khan, the secretary general of the Muslim Council of Britain umbrella organisation, expressed his anger over the London Bridge attack, saying: “We want to do something about it.”

Speaking on behalf of the MCB’s affiliates, he said: “That is why we agree with the prime minister that things must change. Enough is enough. We are ready to have those difficult conversations, as equal citizens with an equal stake in this fight.”

These words carry weight. Muslims in Britain are already speaking out; if you don’t hear them, you’re probably not listening. Certainly the police weren’t paying attention, because the attackers in Manchester and London were already known troublemakers. The Muslim communities of both cities tried to alert the authorities, who dismissed their fears because these guys didn’t seem that dangerous. Even when the imams of the mosques that the killers attended raised the alarm, saying that these guys had gone badly off the rails, the police dismissed their concerns, thinking these guys were nothing more than petty crooks at most.

And here’s the killer part: The imams also tried hard to dissuade these guys, right before they went full terrorist. But even the teachings of Islam — including the all-important Surah 5, Verse 32 — went unheeded. These clowns had gotten it in their heads that they were justified in killing random strangers, even though everyone else, especially those knowledgeable in all scriptural matters, could see that they were not. This is why over 100 leading British imams are saying they will not offer funeral prayers for them. And this is why mosques are banning known extremists from entering to seek converts:

Under the banner of “one London, one community” at the East London mosque, Muslim, Jewish and Christian leaders condemned the attack and called for unity.

Muhammad Habibur-Rahman, the mosque’s chairman, described the perpetrators as “evil terrorists” who espoused a “twisted narrative and perversion of the religion of Islam”. The mosque had stopped extremists at the door, he said, but they “continue to harass our worshippers” and “their hatred of mainstream Muslims rivals that of the extreme right”.

“Their hatred of mainstream Muslims rivals that of the extreme right.” That’s the same bunch that keeps demanding to know where the moderate Muslims who condemn extremism are, but who never stick around long enough to hear the answer. Probably because anything that contradicts their preconceived ideas about Islam and Muslims would put their entire ideology in doubt. Can’t have that, eh? And gee, I wonder who else thinks like that?

Oh yeah: Daesh thinks like that. Because they’re the mirror image of the far-right of the US, Britain and Europe. One group terrorizes Muslims in majority-Muslim countries, the other does it where Muslims are a minority. Same shit, different toilet.

Meanwhile, real Muslims ARE speaking out against terrorism among their own. And they’re going further than that: They are helping the police to track extremist networks, naming names and pointing out faces of extremists who have harassed people at mosques. They are among the taxi drivers who helped frightened victims get safely home. They are among the shopkeepers who offered shelter to those unable to escape. They are among the front-line medical workers who are saving terror victims’ lives and treating their injuries. They are donating their wages to help victims of terror. And they are turning out in force at demonstrations for peace and against hate. They are visible in their communities, and audible in their streets.

So, ‘wingers, you can all shut up now about the moderate Muslims. Your “question” is answered. They’re EVERYWHERE. And they’re doing a lot more than you to actually combat terrorism. Moreover, what they’re doing is what actually works. And the best part is, it’s all in line with the chief teachings of Islam.

PS: This Kuwaiti TV ad is going viral for Ramadan. See if you can guess why!

This entry was posted in Angry Pacifist Speaks Her Mind, Crapagandarati, Fascism Without Swastikas, Good to Know, If You REALLY Care, Isn't It Ironic?, Merry Old England, The Hardcore Stupid, The War on Terra. Bookmark the permalink.